AWARD winning Gwent electrical engineer Luke Elsmore who realised his dreams by securing a coveted place as part of the UK team at the WorldSkills final in Brazil this summer has urged others to follow his lead.

Luke beat off stiff competition from other apprentices in his field throughout the UK to secure a place on the UK Worldskills team for São Paulo, Brazil, in the finals of the world’s largest international skills competition.

Luke was a member of the 40 member strong UK Skills team and will compete in the WorldSkills competition in the industrial controls section of the global competition.

WorldSkills, often described as the Skills Olympics, sees around 1,000 young people aged 18 to 25, from all over the world, come together every two years to compete for medals in more than 37 different skills including electrical installation, welding, web design, cooking, hairdressing and bricklaying.

Luke, a former pupil at Blackwood Comprehensive School, was one of just four Welsh competitors selected to compete at WorldSkills São Paulo 2015.

Luke was named Quality Skills Alliance Wales apprentice of the year and gained a similar recognition from ESTnet earlier this year. He said: “It was so great to have this opportunity to prove myself on a world stage. It was a fantastic experience and I am really hopeful that by competing in the contest other young people in Wales have been inspired to look at signing up for an apprenticeship and the chance to take part in something like this brilliant competition..”

Luke was in training for a year specifically to compete in the WorldSkills competition alongside fellow IAC Ltd apprentice Alex Scott aged 22, from Newport a former pupil at Lliswerry High School. Alongside their apprenticeships at IAC the pair attend the University of South Wales in Treforest and also Newport and District Gwent Training (NDGTA).

Peter Lewis, Managing Director of IAC Ltd, said: “It is a huge honour and terrific recognition for the company to know that our apprentices competed at the highest level and that one was chosen to represent the UK in Brazil.”

Peter said: “Luke and Alex worked hard over very many weeks to secure a place in the World Skills final in Brazil. The pair of them are fine examples of kind of apprentices that we train here at IAC Ltd. Both are excellent engineers.

Peter revealed that three more IAC Ltd apprentices, Oliver Davies, Sam Scott, who is Alex’s brother and Brad Coburn are set to compete at this year UK Skills in November. Peter is hopeful that they will benefit from Luke and Alex’s experience and support. 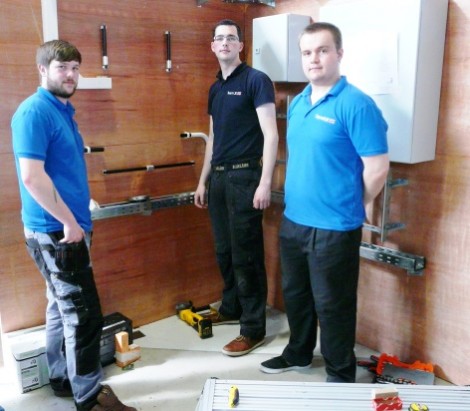